Nasunogahara: A lingering memory of the Meiji period

While walking through a long avenue of cedars, the view suddenly opens to reveal a building standing under the clear blue sky. The white, western-style mansion is composed of a hall building with a central watch tower and two terraced wings spreading out on each side. A close-up view reveals a façade decorated in white, ivy-shaped slates and the unique contours of a lighting window projecting from the roof. The building, which seems as though it had just come out of a movie featuring a noble woman holding a parasol, is the former villa of Viscount Aoki Shuzo, Foreign Minister of the Meiji Government. And this is just one of the many elaborate, sprawling villas scattered among the northern edges of Japan’s Kanto region, oblivious to the surrounding noises of the city.

There was a time during the Meiji and Showa periods where “Nasunogahara,” Japan’s largest alluvial fan located in northern Tochigi prefecture, was packed with large-scale farms. The remaining villas are valuable living witnesses to the area’s past. The people who created these large-scale farms and villas were elder statesmen who contributed to the Meiji Restoration and aristocrats who held important posts in the Meiji Government: the so-called “nobility.” And behind the creation of these farms of the nobility were certain measures that the Meiji Government pressed forward with. 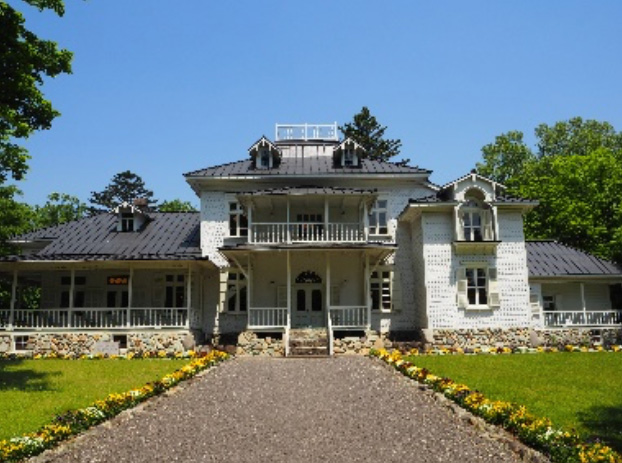 Villa standing on the site of the Old Aoki Farm 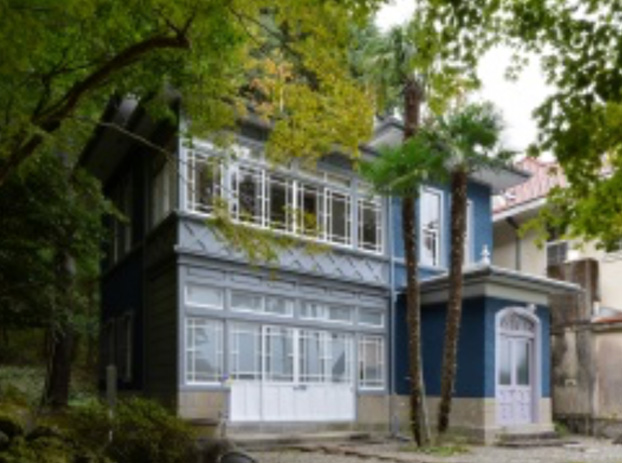 Villa standing on the premises of Yamagata Farm

Reclaiming the vast barren land – The formation of nobility farms

Located a mere 150 km from the capital city of Tokyo, this region was an inhabitable barren land until the beginning of the Meiji period. The total area of Nasunogahara is approximately 40,000 ha. Due to heavy accumulation of sediment and volcanic rock around the midsection of the alluvial fan, the waters of Sabigawa River and Kumagawa River which runs through the center of the area sinks into the ground, leaving only a dry riverbed for the course of almost 10 km. Some parts of the Sabigawa River can even by crossed by car. Stepping down into the riverbed scattered with rocks and driftwood, one can easily imagine the landscape of an era when there was “not even enough water to scoop by hand.”

However, this “extremely flat land” was marked out to be cultivated by the government, which had propelled a policy for encouraging new industries to stand up to western powers. For this purpose, farms funded by the noble class were established in quick succession from 1880 to the 1890s.

These farms of the nobility adopted the western production system of extensive farming and various efforts were made with emphasis on cultivation, livestock farming and afforestation. Cultivation of grapes and grape vines were also started from an early stage. Wine production had already begun by 1884 and by then, wine was being served at the farmers’ tables. In the same way as the “Rokumei-kan Pavilion” in the capital symbolized Europeanization policy, the farms were a practice field for introducing western culture to the outposts. Or perhaps the nobility’s actions stemmed from the strong admiration they had for the lifestyles of European aristocracy and the manors that helped sustain them, which they had seen while studying abroad in their youth.

Despite the sensational development of these nobility farms, cultivating a barren wasteland was by no means an easy feat. Many farms were barely maintained by private funds expended by the owners who disregarded profitability. The reason for this was not only because they were committed to establishing a new nation, but more than anything, because of the strong attachment they had to the land. Several farm owners have voluntarily been buried here and many others are enshrined in shrines that bear their names. Driven by their devotion, Nasunogahara gradually began to transform itself. 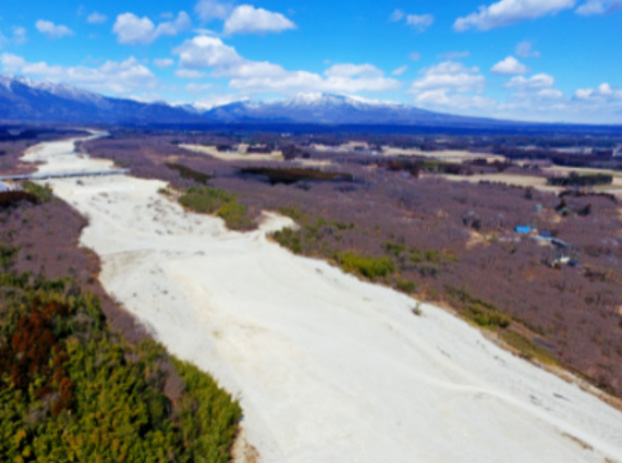 The dry riverbed of Sabigawa River 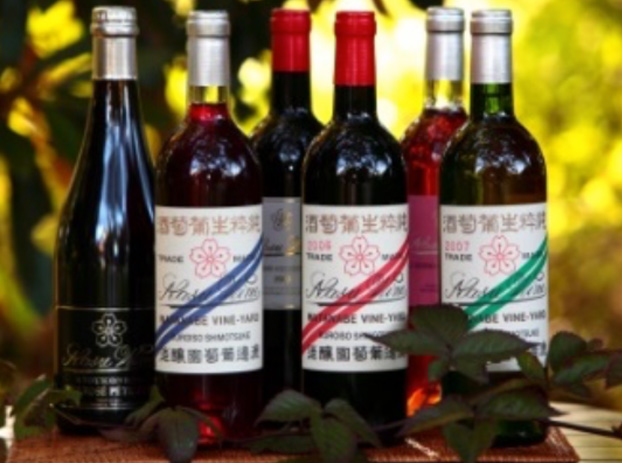 Wine that has been in production since 1884

Landscapes created by the farms of the nobility

One of the most famous large-scale farms of the nobility was “Senbonmatsu Farm,” established by Prince Matsukata Masayoshi who held important posts including the Prime Minister and Minister of Finance. Matsukata believed that western-style extensive farming was the optimum method for farming land with inadequate water supply. He introduced western farming implements to cultivate a vast extent of land, which was at its peak 1600 ha. The current Senbonmatsu Farm still leaves traces of the past and includes a large pasture, feed farm, and lowland forest totaling an area of 800 ha. The villa standing on the premises of the farm is a two-story building with a glass-covered sunroom on its south side. The front of the house on the first floor is decorated with Oya-ishi stone and gives the viewer an impression of a massive, heavy stone building.

The nobility who established farms on what was once uninhabitable wilderness also created new “cities” that attracted people to the area. Their power and authority attracted railways and national routes to the outpost, and farmlands were readjusted with precision to welcome new settlers taking part in reclamation works.

It was 1885 when the Nasu Canal was opened to secure water indispensable to development. Water taken from the Nakagawa River is divided into four routes and travels across Nasunogahara to fertilize the land. Downstream, there was always a farm of the nobility. From there, the flow branched out like capillaries and still provides water today to once reclaimed rice fields. 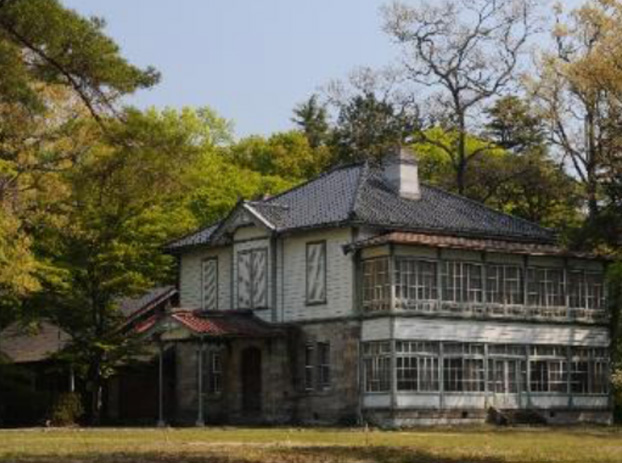 A villa standing on the site of Senbonmatsu Farm 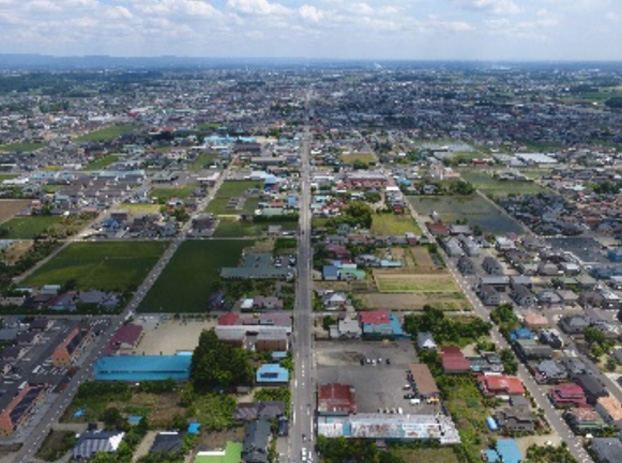 The land was readjusted into a grid pattern

The Nasu Canal Intake Structure that supplies water to Nasunogahara

From “nobility’s dream” to “dairy empire”

Reclamation works which started with the establishment of nobility farms in the Meiji period were continued through the Showa period until it was handed over to post-war pioneer groups. By then the field of action had moved to the hilly areas which had previously been labeled unsuitable for development. Former military reservations and national forests were pioneered and the uncultivated lands of Nasunogahara were gradually eliminated.

Since the introduction of stock farming in the Meiji period, the mainstream domestic animal has changed from sheep to dairy cattle. And with technological innovation and productivity improvement, the scale of farms gradually expanded. Before long, the region had grown to become one of the nation’s major dairy lands as well as the No.1 producer of milk in the main island of Japan.

Driving along the Prefectural Road that runs across Nasunogahara, one can experience a panoramic view which is characteristic of alluvial fans – green pastures and lowland forests running along a flat plain with the magnificent figure of the Nasu Mountain Range in the background. There is no trace of the once barren land. It is a landscape that has been created by Nasunogahara’s history of cultivation that has seamlessly been continued since the Meiji period, a majestic scenery that is distinctively different from the traditional Japanese rural landscape.

Visitors today can experience the beauty of the seasons, commune with nature, and savor the fruits of the earth. Meanwhile, the villas scattered about the region, while enveloped in a dignified stillness, quietly speaks to us about the strong admiration for European culture that the former farm owners had and their ambition to construct a modern nation.

A place that welcomes people with a soft highland breeze and the strong narrative of the Meiji nobility. This is Nasunogahara. 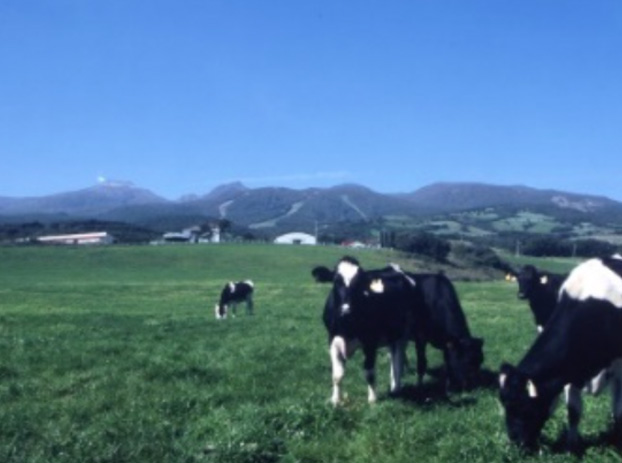 The pastural landscape of the Nasu Plateau 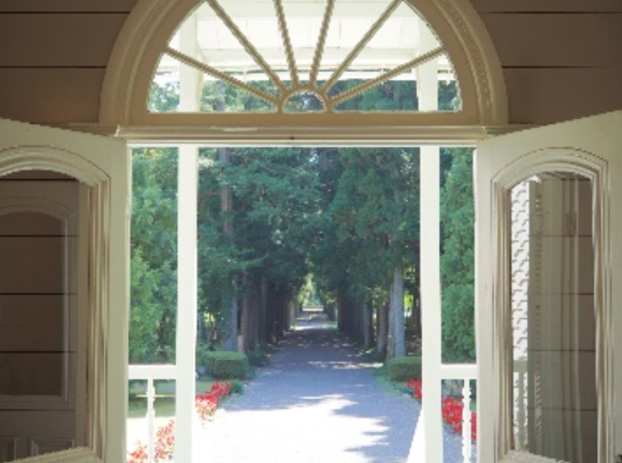 The view of the avenue of cedars from Aoki Villa